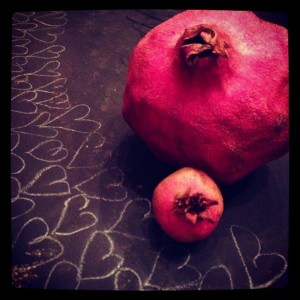 This photo was taken by my beautiful friend Val in Pasadena, CA

Here are some great benefits I found in an article …

“It can help to prevent heart disease, relieve stress and has  even been shown to improve your sex life.

And if that was not enough to convince you to try pomegranate, the fruit is now being hailed as the elixir of youth.

A £2million study has found a daily dose could slow the ageing process of DNA.

An extract of the whole fruit – including pith, peel and seeds – was given to 60 volunteers every day for a month in the form of a capsule.

Researchers monitored the activity of chemicals in their bodies compared with those who took a placebo.

They found a significant decrease in a marker associated with cell damage, which can cause impaired brain, muscle, liver and kidney function as well as ageing effects on the skin.

This decrease – a hitherto unknown benefit of consuming pomegranate – is thought to slow down the oxidation, or ‘rusting’, of the DNA in cells which naturally occurs over time, according to researchers at the private ProbelteBio laboratory in  Murcia, Spain.

They are found in small quantities in the juice but mainly in the inedible rind, husk and white pith which has been harnessed into a pill and a drink.”

Follow Healthy Cooking for Beginners – Heal Yourself With Food on WordPress.com
Join 5,017 other followers